The Monit smart diaper sensor attaches to the outside of a baby's diaper.

Nobody likes a dirty diaper, even if it's one of the realities parents have to cope with. So South Korean company Monit has set out to make the experience a bit more bearable. At CES, Monit shared what might be the ultimate wearable: a smart diaper.

Monit created a cookie-sized sensor with Bluetooth that attaches to the outside of a baby's diaper. The sensor can detect whether there's pee or poo in the diaper and alert parents and caregivers. No more need for a diaper sniff test.

Using a smart diaper sensor can reduce instances of diaper rash and urinary tract infections. Also data from the sensor can be used to track diaper consumption, pee and poo patterns and sleeping patterns.

The Monit smart diaper monitor launched in Korea and Japan at the end of 2018. The company is partnering with Kimberly Clark to bring Monit's tech to Huggies this April.

Monit also plans to transition from selling the smart diaper sensor to a subscription service that provides unlimited diapers and personalized care service for the baby. Pricing has not been announced at this time.

Innomdle Lab, the first spin-off from Samsung Electronics' C-Lab, is set to present its new Sgnl products at CES 2018, a consumer electronics exhibition in the United States, this coming January. Now ready for mass production after a two-year development process, Sgnl is a watch strap that enables wearers to make and receive phone calls simply by placing a fingertip to their ear. 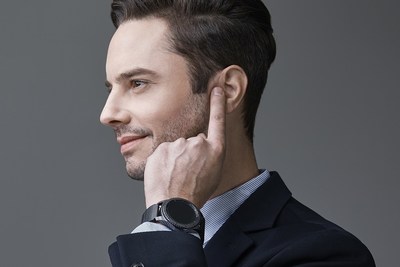 A member of the K-ICT Born2Global Centre, Innomdle Lab has focused on the development of Sgnl since its inception in 2015 and raised USD 2.2 million (KRW 2.3 billion) in funding through overseas crowdfunding platforms since 2016, drawing significant attention at home and abroad.

Innomdle Lab's Sgnl is a new type of smart watchstrap that allows users to talk on the phone simply by placing a fingertip to their ear. Sgnl can be used not only with smartwatches, including the Samsung Galaxy Gear and Apple Watch, but with any regular watch as well.

As Sgnl uses the hand as a medium for transmitting sound, users can talk on the phone without worrying about people nearby overhearing their conversations.

Innomdle Lab will also present Sgnl S, a watch strap for use with common wristwatches that is capable of monitoring the wearer's physical activity and relaying notifications from smartphone applications.

Visitors of CES 2018 can experience and try Sgnl products at the Sgnl booth (No. 44861) in the Sands Expo and Convention Center. The products will be released into the market in the first half of next year.

For more detailed information on the Innomdle Lab, visit www.mysgnl.com

Innomdle Lab (www.mysgnl.com) is the first company to ever officially spin off from Samsung Electronics. Pronounced "i-nom-dul", it means "dudes" or "guys" in Korean with a nuance of friendliness and intimacy. Innomdle also stands for "Innovation Medley", conveying the idea that the team's ambition for endless pursuit of innovation by using groundbreaking technology to resolve daily discomfort.

K-ICT Born2Global Centre (www.born2global.com) is a full-cycle service platform for global expansion. Since inception in 2013, Born2Global has been setting the standard for successful startup ecosystem as the main Korean government agency under the Ministry of Science and ICT. Born2Global has expanded and transformed startups to be engaged, equipped and be connected with the global market.

Products entered in this prestigious program are judged by a preeminent panel of independent industrial designers, independent engineers and members of the trade media to honor outstanding design and engineering in cutting edge consumer electronics products across 28 product categories.

TwoEyes VR is a 3D 360° VR camera, having two pairs of lenses mimicking the two eyes of a human for capturing the surrounding in 360°. Two pairs of fisheye lenses separated by 65mm, a standard distance between human eyes, shoot in 360° that precisely correspons to both eyes to produce high-definition videos so users can enjoy 3D VR content in an even more realistic fashion.

The prestigious CES Innovation Awards are sponsored by the Consumer Technology Association (CTA)™, the owner and producer of CES 2018, the global gathering place for all who thrive on the business of consumer technologies, and have been recognizing achievements in product design and engineering since 1976.

TwoEyes Tech's TwoEyes VR will be displayed at CES 2018, which runs January 9-12, 2018, in Las Vegas, Nevada. A selection of Honorees also displayed at CES Unveiled New York, which features dozens of exhibitors and networking opportunities.

Entries are evaluated on their engineering, aesthetic and design qualities, intended use/function and user value, unique/novel features present and how the design and innovation of the product directly compares to other products in the marketplace.

Products chosen as CES Innovation Honorees reflect innovative design and engineering in some of the most cutting edge tech products and services coming to market.