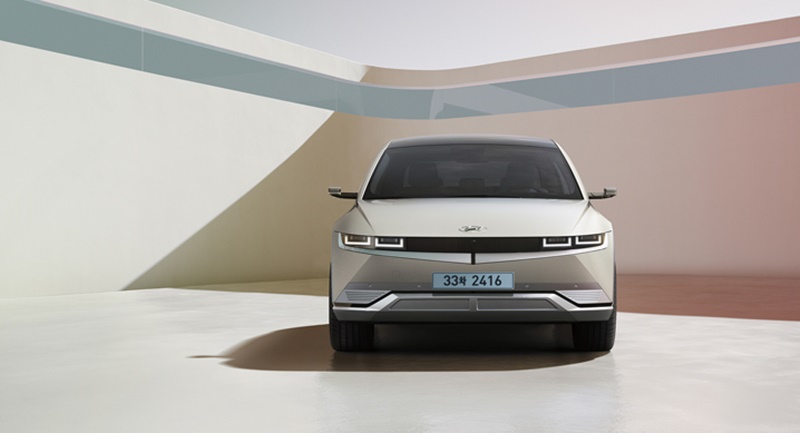 Prime Minister Lee Nak-yon (second from right) on Oct. 31 poses for a group selfie while on the nation's first fuel cell police bus with a group of police officers in front of Seoul's National Museum of Korean Contemporary History. (Yonhap News)

By Kang Gahui and Lee Hana

Last year on Oct. 24 during an inspection meeting for national affairs, Lee had asked that all police buses based in Seoul's downtown area of Gwanghwamun Square be replaced with those running on hydrogen fuel cells. A little over a year later, the first such bus was shown to the public.

"By 2028, all police buses will be those powered by hydrogen fuel cells. The new buses will not only improve working conditions for police officers but also create a better environment for Seoul residents," he said during his visit.

Police buses using conventional internal combustion engines are typically left idle by the roadside for extended periods of time, creating noise and air pollution that civilians have long complained about. The new model, however, makes little noise and releases no harmful gases.

One model was parked on Oct. 31 by Gwanghwamun Square and another by the National Assembly in Seoul's Yeouido area for public viewing.

The Korean National Police Agency will purchase two fuel cell buses next year and gradually replace all police buses with the new model by 2021. Plans for introducing fuel cell patrol cars are also under review.

With the administration pushing for the development of vehicles running on hydrogen fuel cells to reduce particulate matter in the air and pioneer the future car market, the Ministry of Trade, Industry and Energy announced a plan to develop eco-friendly vehicles by 2030 including fuel cell maintenance trucks.

Korea.net in 2019 will feature startups leading innovative growth in various sectors of the Korean economy. The second article in this series is about Ecube Labs, a provider of comprehensive solutions for waste management by using the internet of things (IoT), a major force propelling innovative growth.

Despite being largely ignored by most people, an emerging sector is quietly expanding with the advancement of society: waste collection and management.

The rising volume of products and services is fueling the growth of waste in tandem. Despite relatively low interest in waste disposal and management, one startup in Seoul has created business opportunities by using new technologies in the field. Ecube Labs provides solutions for smart waste management while saving collection costs. In an interview with Korea.net on Dec. 14, 2018, at the company’s office in Seoul's Guro-gu District, CEO Sean Gwon defined his idea of innovation as "something that you can ignore unconsciously." "Many sectors have benefited from technological development but not the waste industry, which lacks efficiency and requires many improvements," he said.On why he started this business, Gwon said, "The volume of the global market for waste collection is an estimated KRW 600 billion but the industry isn't competitive. So I deeply thought about what technological improvements were needed."

Smart trash bins using renewable energy Opened in 2011, Ecube released the next year Clean Cube, a solar-powered trash compactor using wireless technology. Using solar energy batteries, Clean Cube-attached trash bins detect the quantity of waste they collect and can hold up to eight times more trash than non-compacting models. In 2015, Ecube developed CleanFlex, an ultrasonic fill-level sensor attachable to any trash can that monitors the quantity of contained waste. A trash can using CleanFlex monitors waste quantity through ultrasonic waves and detects fire hazards. CleanFlex collects waste data and sends them wirelessly to the CCN. Users can remotely check the volume of collected waste using the internet, resulting in lower cost thanks to using the shortest routes to collect waste and fewer visits to garbage containers. IoT boosts waste management efficiency In 2012, Ecube conducted a pilot project in which 70 CleanCube trash compactors were installed at four universities in Seoul -- Seoul National, Korea, Yonsei and Dongguk. The company has since installed 3,000 CleanCube trash compactors and CleanFlex in Seoul and throughout Korea as well as overseas including Washington, D.C., Shanghai, China, Birmingham, U.K., and Santiago, Chile. Ecube’s solar-powered trash compactors can be also found in public places abroad such as Hermosa Beach in Southern California as well as Dublin Airport in Ireland. In addition to regional government bodies and trash collection companies, private entities like the Dublin Airport Authority of Ireland have sought the company’s waste management solutions to reduce collection costs. On his company's most memorable overseas project, Gwon selected the so-called Melbourne Project in Australia's second-largest city. Ecube changed all trash cans downtown with 500 of its solar-powered waste compactors, raising waste collection efficiency up to 70 percent, he said.

Demand for Ecube's method of waste management using wireless communication is rising among smart city projects worldwide. For example, the company in January last year won a bid in Baltimore, Maryland, to install 4,500 trash cans by 2020. Thanks to its extensive and varied experience, Ecube is pursuing a national project in Korea to build smart cities, a sector promoted by the government to lead innovative growth in the country.Appointed to the smart city special committee in November 2017, Gwon has provided consultations to the provincial cities of Sejong and Busan on building smart cities equipped with cutting-edge technologies such as artificial intelligence and autonomous vehicles. On his company's ultimate goal, he said, "We wish for all waste collection firms in the world to use our solutions.""Almost all computers use the Windows operating system, right? Likewise, we hope that our products can become the Windows of waste management that all waste management companies use." etoilejr@korea.kr