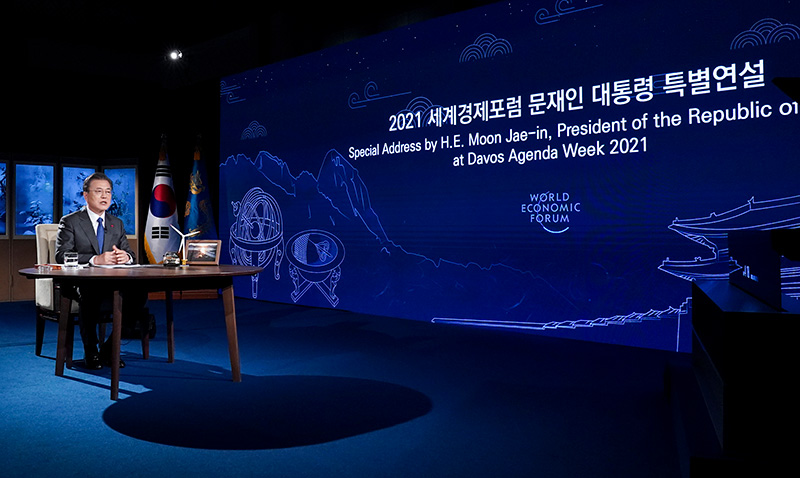 By Xu Aiying and Yoon SojungPresident Moon Jae-in on Jan. 27 called Korea a "safe and stable partner and investment destination."

In a special address to the Davos Agenda 2021 of the World Economic Forum via videoconferencing, President Moon said that despite the pandemic, Korea has never resorted to a lockdown or border closure.

"I hope that the Korean New Deal will lay ground for global companies and venture start-ups to take on new challenges and become a catalyst for expanding cooperation in future industries," he said."Korea will host the second P4G (Partnering for Green Growth and the Global Goals 2030) Summit in May, through which we seek to spearhead international cooperation in overcoming the climate crisis."

"As COVID-19 becomes more prolonged, inequality is widening — a gap that we are witnessing both within countries, and between countries,” he said. "Equally as important as responding to the immediate COVID-19 outbreak and the economic crisis, is our commitment to pool our wisdom to fight against polarization and inequality in the post-COVID-19 era."

On Korea's COVID-19 situation, the president said, "Korea has entered the stage of overcoming this pandemic, and has set a goal for inclusive recovery and resurgence."

"As with all other countries, we will begin by carrying out vaccinations which will be the first step we take towards herd immunity," he added."Korea has entered into contracts with many pharmaceutical companies to secure a supply of various types of vaccines that will sufficiently cover our entire population. We have decided on free vaccinations for the country to uphold the cause of an inclusive recovery in our everyday lives."

The chief executive's speech was streamed via videoconferencing with other influential global figures attending the forum in Switzerland, which hosts the event every year.xuaiy@korea.kr With this year marking the tenth anniversary of the strategic partnership between Korea and the European Union (EU), President Moon said, "Based on the achievements we have accomplished together over the past decade, Korea will cooperate even more closely and join forces in preparing for the post-COVID-19 world."

This was the first summit between Korea and the EU since the outbreak of the coronavirus pandemic earlier this year.

"In the course of responding to COVID-19, the world has once again experienced a great awakening with regards to the significance of climate issues and the environment, and has felt the force of the rapidly advancing digital age. I believe that strengthening cooperation on climate change and the digital economy is of paramount importance as we prepare for the future together," President Moon said.

He also hailed the new EU leadership for being at the forefront of taking on global climate and environmental issues through the European Green Deal policy, adding that he hopes the EU will serve as an important partner for the Moon administration's Green New Deal.

The two EU leaders lauded the Korean government's "effective response" to the pandemic through "rapid, transparent and innovative measures." They also assessed how bilateral relations have deepened and developed based on three major agreements on political relations and sectoral cooperation, free trade and cooperation in crisis management.

Marking a decade of their strategic partnership, President Moon and the two EU leaders agreed to expand cooperation in areas such as economy and trade, digitization, the environment and energy in a mutually beneficial and future-oriented way.They also agreed that establishing peace on the Korean Peninsula and developing inter-Korean relations are important not only for both Koreas and Northeast Asia, but for global peace and stability, pledging to work together on this issue.With Seoul set to host next year the second Partnering for Green Growth and the Global Goals 2030 (P4G) Summit, President Moon asked for the EU's active participation in this event.